Okay, so this was not made in a tagine (since I don’t have any space in my tiny condo for another large kitchen gadget or pot) but I find a large frypan with a lid does sufficiently well. If you’re fortunate enough to have a tagine, I think it’s safe to assume that you are hardcore and probably already know how to make the real deal. 🙂

This is probably not the most authentic recipe but I love it just the same. I’m definitely someone who “eats with their eyes first”, and this recipe is just so vibrant! Credit for this delicious, easy and flavourful recipe goes to my lovely sister who first introduced me to this many years ago when she made it for our family one night served over couscous. I’ve been making it ever since and is one of my go-to quick dinners when I want something warming during the cooler seasons. I’ve replaced the couscous with quinoa, which packs more fibre and protein and is gluten-free.

As with many of my non-baking recipes, I tend to eyeball measurements and change up the contents depending on what’s in my fridge. Feel free to adjust spices to taste and use different vegetables such as eggplant, peppers, broccoli or even kale! If you can get your hands on some Ras El Hanout (a Moroccan spice blend containing up to 30 different spices including cardamom, cinnamon, nutmeg, ginger and turmeric) then toss that in instead. That’s the beauty of cooking. Make it your own! 🙂 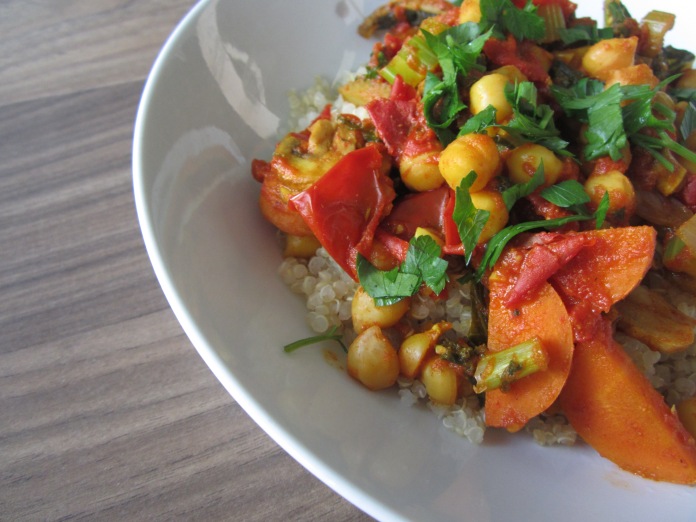 Looking For A Recipe or Past Article?